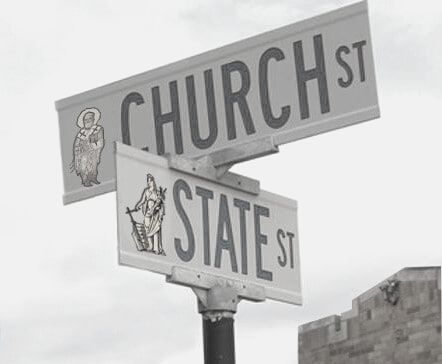 Europe turned its back on religion and believed with absolute faith in nature. They considered what is beyond nature as deception of minds and hearts. They completely renounced the faith and sought an alternative to that and found it in nature. The Europeans established their civilization on pure materialism because, in their view, science is anti-religious. It is not surprising that the Jews were behind the call to establish a life other than religion to control and remove the religious barrier that stood before the Jews, like a stick between them and the nations of the earth [1]. Secularism has failed to achieve happiness, satisfaction, and tranquility for the European man despite its material and cultural progress because tranquility and satisfaction can only be achieved by faith in God Almighty, following his guidance, complying with his orders, and staying his prohibitions. There is a difference between the one who follows the guidance of the Creator who knows what sets man straight in his religion and in this world, and the one who follows the guidance of a creature that cannot benefit himself or harm himself, let alone bring benefits to others.

The principle of ‘the end justifies the means’ was clear in the writings of some Western philosophers, and later, Western societies applied it in the real world. Machiavelli called for this principle in his writings [2]. He thinks that the ruler must be cunning like the wolf, ruthlessly ferocious like the lion, he must be disloyal like the treachery of the fox, and learn how to move away from kind and good, and make good use of the principle ‘divide and rule’, to save his authority. But at the same time, he must be skilled in concealing his bad qualities, good at showing off and showing good qualities, and he must know that good deeds may bring hatred like evil deeds. Therefore, if the leader wants to preserve his authority, he must commit some evil and sins [3]. Hitler used to keep this book near his bed and read it every day before he would sleep, and both Lenin and Stalin learned from it [4]. In fact, some Western philosophers went even further, like Thomas Hobbs, who says that man is a wolf for his fellow human brother, so, if you are not a wolf, other wolves will eat you [5]. These Western philosophical ideas were one of the adverse effects of distancing the divine approach from human life as well as distorting and twisting it, as the Jews and Christians did.

Europeans were overloaded with the fire of these human philosophies before others, resulting in millions of deaths in the First and Second World Wars, in addition to the oppression by European countries of other people and the seizure of their wealth through colonization. The question that comes to mind is, are these ideas suitable for leading nations and groups? Where the Europeans right when they invented human philosophies and demonic ideas based on pleasure and interest far from religion?

The breakdown of family life in Western societies:

Western civilization faces severe social hardship and massive humanitarian crises due to it turning away from the right religion and its affection with secularism. An American study confirmed that 40% of mothers in the United States of America are not married. They gave birth to their children from relations outside marriage in a record that is unprecedented in the history of the United States. All statistics confirm the alarming increase in this phenomenon in most Western countries or specifically non-Islamic countries. This is because of the culture of atheism adopted by these countries. One of the centers interested in these statistics is the American Bioresearch Center, which is famous and highly credible in this field. In a study of this center conducted in 2014, it was found that children born as a result of adultery was a prevalent phenomenon in many Western countries, notably Iceland, where the ratio of children born out of wedlock is 67% of the number of births, in France it is 56%, in Britain 48%, and in Denmark the proportion of children of adultery is 51%, which means that more than half of the society consists of the children of adultery. According to the statistics of the American CDC Center, this phenomenon was only 5% in American society in 1960, but it began to accelerate surprisingly over the last 50 years until it reached more than 40% in 2015 [6].

The West is dying. Its people have ceased to reproduce, and its population has stopped growing and began to shrink. Since the Black Death, which took the lives of one-third of Europe’s population in the fourteenth century, there has not been a more serious threat to the survival of European civilization than this present danger. Today there are 17 European countries with more burial funerals than birth ceremonies, and there are more shrouds than crawls. It seems that the principle of pleasure is unable to give people enough reason to live, and its early fruits seem poisonous. Is Western civilization about to follow the Lenin Empire to the same shameful end? [7]

Capitalism and the Humiliation of slaves:

Capitalist regimes were based on enslavement and exploitation of slaves in order to achieve the so-called European renaissance that is not accepted by reason or religion.

Ramadan Issa al-Limoni says, under the title “The Renaissance of Europe and the Subversion of Africa”: colonial companies have tightened their control over farms, pastures, and mines, and have exercised various types of exploitation of the local population, including forcing them to work in harsh and brutal environmental conditions to produce a large amount of agricultural crops and extract minerals from the mines. The dramatic decline in the number of local people due to the enslavement of the populations has placed the burden on the limited remianing people who cultivate the crops as ordered by the colonialist governor. In addition, there was an important observation which is that the slave trade was practically targeted at young people and women who were fit and physically healthy, and therefore, with the constant depletion of human resources — and those of almost childbearing age — and their dispatch to Europe and America, because economic activity and associated social development have been disastrous in Africa. The slave trade has drained the local population, and, as we have pointed out, the rest of them were forced to leave their lands, prompting the overseas companies engaged in the slave trade to search intensively for other sources of slavery between Senegal and Cunene Rivers. It means that no African region has been spared from slave trade. In fact, many of these companies have extended their activities to looting, theft and raiding of ships and piracy [8].

Under the absolute capitalist system, there are many contradictions that obscure balance and stability. Under this system, the rich live alongside the poor, skyscrapers in one corner of the city, and huts or even tin houses in another corner. In fact, we often find a high and majestic tower next to a despicable house, as if it says, “Why did they put me next to this mean tramp?” Or as if it is saying, “Is it not enough of beauty and splendor for you? Why is this arrogance?” Under this system, you can see a Rolls-Royce, Mercedes, BMW, Porsche, Cadillac and other high-end luxury cars, as well as pedestrians who do not have the luxury to have an ordinary bike or motorcycle [9]. The Europeans who have taken secularism as a way to follow in their lives have failed resoundingly to bring happiness to themselves and others. How can they be happy having separated the divine approach from their lives? How can they be felicitated when they have destroyed everything in order to build their European civilization free of religion?!

O Allah, return us to your religion in an elegant manner and bring us together with the Prophet (peace be upon him) in the Gardens of Paradise and peace be upon all the Messengers, and praise be to Allah, Lord of the Worlds.

[6] Dr Abdul Daem Al-Kaheel, the phenomenon of children of adultery is proof that the Hour of Resurrection is near